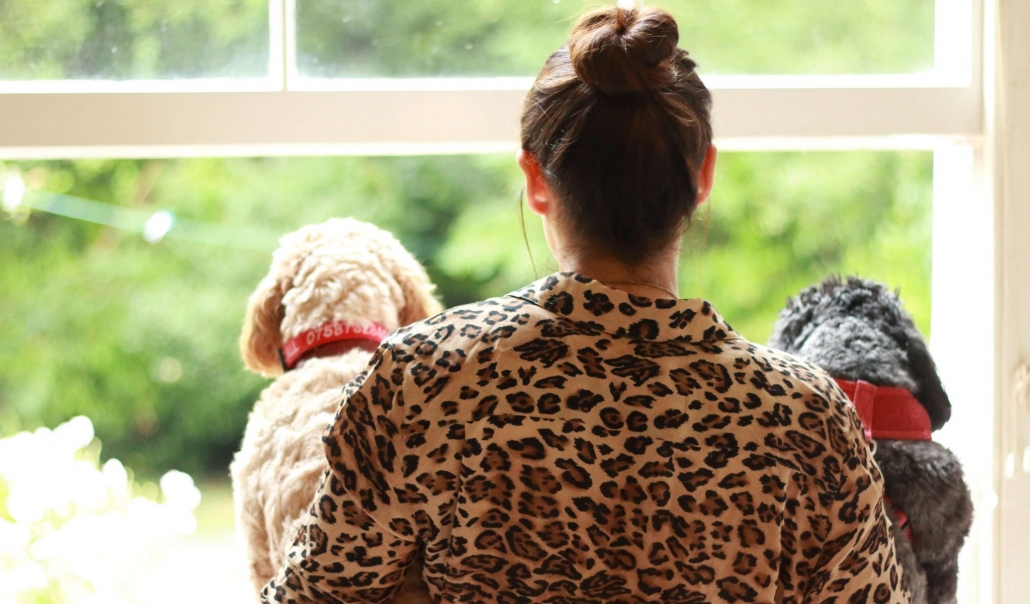 As I glance down from my laptop screen, take a peek under the kitchen table where I’m sat, and watch the four furry club members curled up around my feet, I get that now familiar sense of gratitude that I’m right where I was always meant to be.

Just four years ago, I was sitting at a desk in the London offices of a global Internet giant. Glancing down at files of work that left me cold and a pair of training shoes that would make my daily rat race commute marginally less painful.

I was so lucky. That’s what I was told, anyway. There was the status of having a great job at the coolest company. Being surrounded by inspirational, smart, driven and accomplished colleagues. Anyone would kill for the opportunity.

Most of all, I wanted a dog of my own. If I could give it the best life possible. Something that seemed unlikely, given the typical long hours of city life. I’d always had a huge affinity with dogs of all shapes and sizes. I’d surround myself with them at every opportunity.

I was that friend, and we all have one, who couldn’t pass a dog in the street or sat patiently at his owner’s feet by a pub’s open fireplace and not stop to say hello and ask permission to dish out a belly rub or two. Or three.

As I walked along London’s South Bank one afternoon with a friend, I mused  “You know what would make me happy? A life where I could have cups of tea and conversation with a rainbow of people every day. Shoot the breeze about life with a little terrier called Hero at my heels” ( yes my then imaginary dog already had a name. More on that in another post )

Just saying that statement out loud caused something to shift in me. Suddenly it became more than a just a wish for a different, more fulfilling life. It became a necessity. I knew I had to take a leap of faith, sooner rather than later and make it happen.

The moment came in Autumn 2015, when It was time to be brave, take a deep breath and jump into the unknown that was self-employed entrepreneurship. But at the time, being a dog carer as a career seemed more like wishful thinking than a real option. But at least if I was my own boss, I could have a dog, right? So I’d decided that I’d create a new craft tea brand with a local neighborhood vibe.

I dug deep, learning all I could about the tea trade, taking masterclasses, visiting tea importers and creating blends. But It was slow going. Working alone for the first time in my life was a challenge, I had daily crisis’ of confidence, zero income, dwindling savings and a nagging feeling that this wasn’t quite how I had expected being my own boss to feel like.

In short, I was depressed. I was anxious and even just keeping my motivation up was a constant battle. Looking back, and having spoken to other solo entrepreneurs, I realise that this is a common feeling.

But at the time, I felt isolated and desperately needed an excuse to get out of the house each day, get some fresh air, connect with people again. So I decided to take a couple of friends dogs to the park at lunchtimes, as a reason to get out of my pajamas and move my limbs about for a while.

Well, It quickly became apparent that walking those dogs did more for me than just get me out of the house. It became the thing I most looked forward to every day. I couldn’t wait to see my furry walking companions, and see how happy they were to join me for our daily outings. Not forgetting how much I looked forward to the chatter amongst the other people walking their dogs in the park.

I wanted to understand dogs better. Learn to communicate with them better. Take care of them better. It made me hopeful, cleared my mind and became the very best antidepressant I could have asked for. Dog’s are pretty incredible like that. They’re so healing. So I began to take on more bookings. A walk here, a weekend boarding client there. And so it began.

A problem shared is a problem solved

As time went by, I began to identify some fundamental flaws in the existing dog care offering. It seemed to me that dog owners were having to compromise at every turn.

Dog owners had a coupl of options to find dog care.  One option was to go the traditional route and hire a local independent dog walker/boarder or daycare provider. Often they would be referred through word of mouth or in local adverts. The other, newer option was to find a dog carer via any number of online pet sitter agency websites.

I had gained clients via both of those methods and certainly couldn’t fault it for getting me dog sitting jobs. And now, having personally cared for over 500 dog clients and counting, I can honestly say that it was the start of my intensive education in dog care. But If I had been the dog owner on the other side of the transaction, I’d have had my concerns.

There are many wonderful, experienced, insured, and caring dog professionals out there. But there are also an awful lot of people who do it because they think it looks fun and easy and that it’s a quick way to earn some cash without any skills or experience.

Inexperienced dog carers may take on too much responsibility too soon, or accept dogs that they aren’t confidently able to handle. They may do the bare minimum required, or let their clients down altogether. And when you’re talking about man’s best friend, our furry family members, that just won’t do!

The other option available to dog owners was to go via a dog sitter website. As a new dog sitter, you sign up on the website and create a profile. That’s it. You’re now an approved dog sitter! No background check. Zero training.  Zilch references. Negative on the home inspection, And definitely no DBS check. Not even a phone call with the company for them to ask about your experience. The company simply acts as a middleman. It’s totally up to the owner to vet the dog carer themselves. Again, when I put myself in a dog owner’s shoes, it just wasn’t good enough.

But what if, I wondered, there were a dog care company that would carefully select, screen, background check, reference, interview, dog first aid train, insure and maintain an ongoing one to one relationship with each and every one of its dog carers. What if those dog professionals worked as a team? A club, supporting each other, covering availability, sharing advice and information, and above all sharing a genuine love for the doggy club members under their care. Now that would be a club I’d want my dog to be a part of.

When Brexit was announced in mid-2016, the tea business that I had been working on suddenly became no longer viable to launch and I logically speaking, I should have been devastated. After all, I’d spent almost a year of my life and all of my savings on it. But the first thought I had was YES! Now I have time to make this dog club idea a reality!

The future of the club

And so, The Belly Rub Club was born. It’s been an incredible first couple of years and we are so lucky to have the 500 and counting dog members that we do. So much time, blood, sweat, tears, and sacrifice has gone into making the club work, but so much has been gained already and I’m so grateful to finally have this dream becoming a reality. Our wonderful team is still small but growing. We are adding amazing dog walkers, house sitters, home boarders, dog trainers, dog groomers, behaviorists and dog-friendly companies to our team all the time.

We have BIG ideas for raising the standards of dog care of the future. We’re determined to make dog ownership in the city a pleasure for both dog and owner and with the right quality support from a team of dog professionals who love and know your dogs as if they were their own, well, viva the doggy revolution!

In The Spotlight – Interview with Belly Rubber Lola

Surviving Fireworks Season with your dog
Scroll to top